On September 23, 1999, NASA’s 193-million-dollar Mars Climate Orbiter entered orbit around Mars—or was supposed to. Instead, it was lost, either by falling into the Martian atmosphere and disintegrating or by flying straight through the atmosphere and falling into orbit around the sun. Initially, engineers and officials at NASA were completely baffled. But a closer investigation of the problem revealed a frighteningly simple mistake: failure to convert from English units to Metric ones.

Lockheed Martin, a firm contracted for parts of the spacecraft’s development and construction, provided force units for the Climate Orbiter’s directional thrusters in English units of pound-seconds. Meanwhile, engineers and computers at one of NASA’s Jet Propulsion Labs assumed the measurements were in metric units of newton-seconds.

The difference between the two units is quite significant; one Newton approximately equals 0.225 pounds, and one pound corresponds to about 4.448 Newtons. Essentially, this means that the thrusters affected by this error applied approximately 4.5 times the required amount of thrust. Given the craft’s high velocity, this small mistake of applying 4.5 times the specified force actually only resulted in a 0.001 meter per second error, which was not enough to cause any major concerns during early flight stages. However, several of these errors compounded over the flight path caused the craft to fly over 100 kilometers (62.1 miles) closer to Mars than planned. With this significant mistake in mind, it’s not surprising that the mission failed.

Technically, determination of who is at fault relies on whether the contract between NASA and Lockheed Martin required the use of metric units. Since NASA had used metric units as the standard since at least since 1990 Lockheed Martin is likely at fault. In reality, NASA also bears some responsibility for the failure because none of their engineers or managers detected the problem, even in the face of several anomalous measurements.

However, this incident really demonstrates a larger problem of the unwillingness of the United States to adopt the metric system of measurements. The United States is one of only three countries in the entire world that does not exclusively use the metric system. Even England has left the English system behind. This means travelers to Canada have to readjust their expectations for speed limit signs, food packages, and elevator capacities. International business and trade constantly have to convert units of measure, as well as units of currency. Furthermore, United States residents have to memorize a complicated and seemingly arbitrary set of conversion factors that not only define metric units by their English counterparts but also relate English units to each other. For example, the metric kilogram approximately weighs 2.2 pounds, and a gallon can be divided into 16 cups.

Unfortunately, the confusion doesn’t stop there. The kilogram is technically a measure of mass, while the pound is a measure of weight, or force. The difference between mass and force is represented by Newton’s second law of motion: The net force acting on an object is equal to the product of its mass and its acceleration. Physics students will recognize this as the equation F=ma. If the pound is a measurement of force, then it is not equal to mass, but instead equal to mass times acceleration. Such a distinction might not seem significant, but it has quite powerful implications. For example, the acceleration caused by gravity on the moon is approximately 0.166 times that of earth. So, an object on the moon will weigh 0.166 times its weight on the earth but have the same amount of mass. Essentially, this means every food package that converts one kilogram to 2.2 pounds is only correct if it is on Earth. 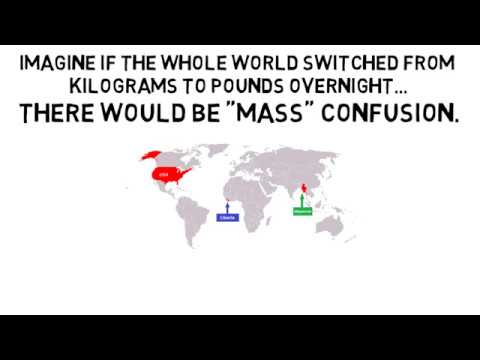 If the United States could change over to the metric system, measurements and units would make much more sense, and business and engineering would become easier. However, it can’t happen overnight. Any change this drastic would create a generation of confused people, resulting in speeding tickets from unsuspecting drivers, failed breads from absent-minded bakers, and more engineering mistakes.