As the NBA season reaches the halfway point, the All-Star Weekend is a fan favorite for viewers and players alike. The weekend’s main events consist of competitions that celebrate athleticism not connected to specific teams. Celebrities flock to the stadium to watch some of the best athletes in the NBA showcase their skills. While there are a number of challenges for the athletes to complete, here are some of the main events:

1. 3-Point Contest: For the past few years, the 3-point contest was a huge hit. Last year, Eric Gordon upset Kyrie Irving, and this year we got to witness 3-point contest history. The competitors were Bradley Beal (WAS), Devin Booker (PHX), Paul George (OKC), Wayne Ellington (MIA), Kyle Lowry (TOR), Tobias Harris (LAC), Klay Thompson (GSW), and reigning champion Eric Gordon (HOU). The first round of the event was very disappointing for OKC Thunder fans as Paul George, who at the time had the second  most 3 pointers made, only scored 9 point out of a potential 34. However, as it came down to Tobias, Harris, Devin Booker, and Klay Thompson, the final round did not disappoint.Immediately, Tobias came out hot, but cooled down right as he got toward the money ball rack, scoring a cool 19 points. Devin Booker, on the other hand, was hot through the whole competition. He was on fire and scored an NBA 3-point contest record of 28 points! Klay Thompson was right behind him, however, and put on an amazing performance with 25 points. All-in-all, the 3-point contest did not disappoint this year, thanks to the incredible performances of Klay Thompson and Devin Booker. 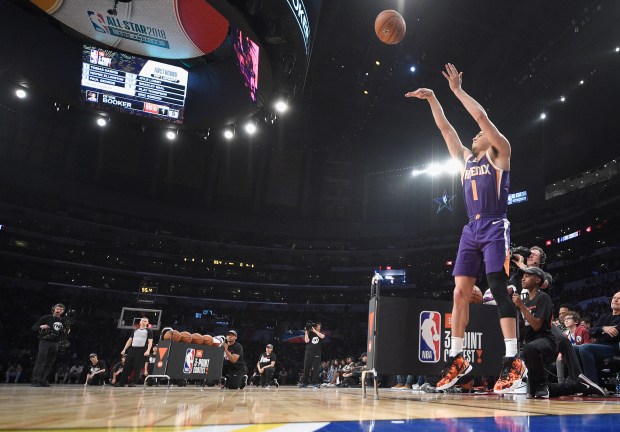 2. Slam Dunk Contest: Without Zach LaVine or Aaron Gordon, people were a little skeptical of this year’s Dunk Contest. LaVine and Gordon had helped to revive the spirit of the contest by showcasing creative and explosively athletic dunks, never before seen. Even though many thought this year’s contest was mediocre, there were some outstanding dunks. The first round of the contest was a bit of a throwback. Larry Nance, dressed in his father’s old jersey, did an incredible cradle dunk, recreating the dunk his father did to win the contest back in 1984.  Arguably one of the most difficult dunks of the night was the incredible 360, between the legs, hand-switch by the Mavericks young athletic rookie Dennis Smith Jr. It was followed immediately by Rookie of the Year candidate, Donovan Mitchell, who jumped over three people crouching down. In the end, Donovan Mitchell won it all with a reverse 360 windmill dunk, another throwback to a Dunk Contest legend, Vince Carter. 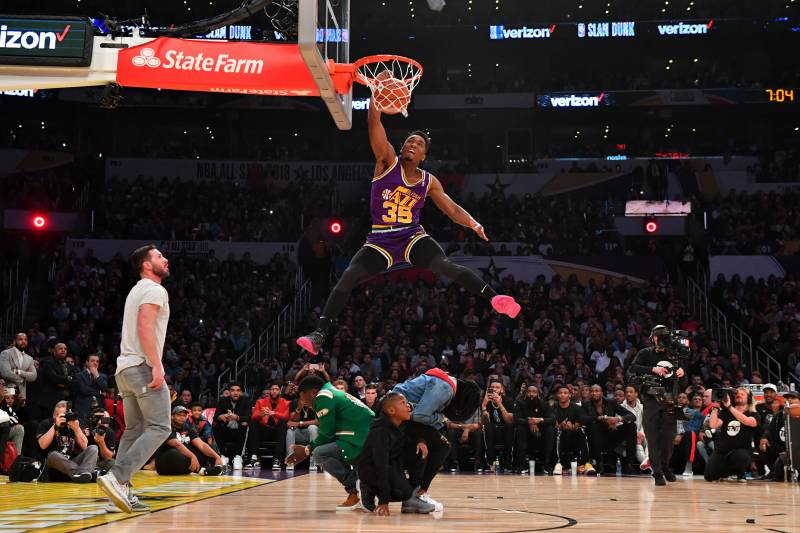 3. All-Star Game: This year the NBA finally fixed the All-Star game format… for the most part. We got to see the two team captains, Stephen Curry and LeBron James, go head to head. In years past, fans complained that the game wasn’t fun to watch. It was essentially  a bunch of NBA players taking half court shots and doing crazy dunks. However, the NBA spiced it up a little bit this year. Because of the team captain, playground style, there was much more competition and we even saw a little bit of defense with rivals Russell Westbrook getting his shot swatted by Joel Embiid. In the end, LeBron was the deciding factor for the outcome of the game. He hit his signature step-back 3 right in the mouth of Joel Embiid with only 1:30 to go. A minute later, he scored a tough contested layup to put his team up by 3. With a few assists shy of a triple-double, LeBron put up 28 points, 10 rebounds, and 8 assists, so it really isn’t a surprise that he took home the All-Star Game MVP. This year was a huge step in the right direction for the All-Star Game, and hopefully in the years to come we will have more competitive games.

Each year, All-Star Weekend gets better and better. It’s hard to imagine how 2019 could top this year’s contest, but knowing the superstars on the court, I am sure it will.