Today there is a hunger, economy, and food crisis in Venezuela. The country is losing money rapidly, and there are no jobs to sustain the economy. Since the economic plunge, the price of food is skyrocketing and the country is not accepting help from other countries. With food and basic supplies expensive and scarce, the people cannot afford to pay and this has led to a hunger crisis.

“Every single day waiting for six if not longer hours for real basics. We’re talking pasta, flour, that sort of thing. I remember – I’ve been at food drives outside supermarkets where people are fighting, beating each other up or sometimes worse just for a couple of bags of pasta” (npr.org). Food is scarce, and people in Venezuela are desperate for food and water. There are small quantities of supplies because the country is losing money. Its income has gone from 30 billion dollars of income to 9.9 billion dollars. 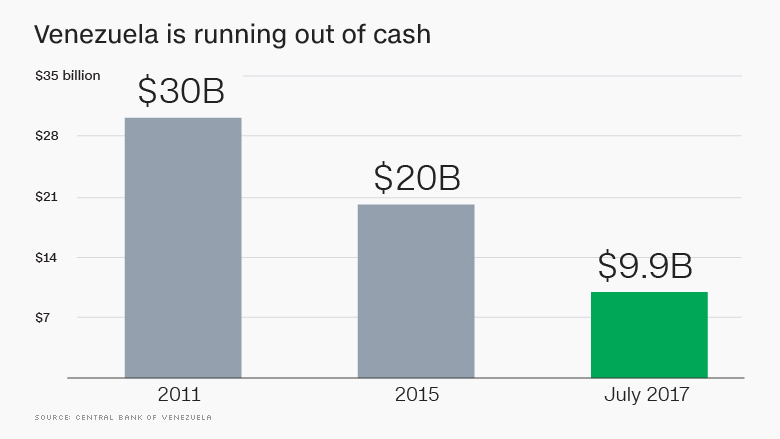 The loss of cash flow is the main reason food prices are inflated. An example of the inflation of basic supplies is the cost of a water bottle, 1200 bolivars, or roughly $119 in the U.S. This is an unaffordable cost for the citizens. Bolivars are the currency in Venezuela, and last year the value for each bolivar was one dollar. Today, each bolivar is worth less than a cent. There are empty supermarkets in every corner of the country and lines of people begging for food and other basic supplies such as water, batteries, and laundry detergent. With nowhere to buy supplies, citizens fully rely on the corrupt government. The government gives each family a monthly food bag it deems helpful; however, this is not enough to provide for a family. The monthly help does not even include toiletries or batteries.

The government is handing out food for the citizens of Venezuela, yet there is still a hunger crisis.  The monthly food bags are not sent to all families and even with the bags, citizens are still having to skip meals daily. Some statistics report that 85% of families skip meals, 40% of the population goes an entire day without eating regularly, and 34% of people eat from garbage cans or send their young children to beg for food. It is said the average Venezuelan in extreme poverty has lost 19 pounds due to the lack of food. One may ask what is being done to help in such a crisis. Some countries such as Argentina, Brazil, Paraguay, and Uruguay are trying to help the people; however, the president Nicolas Maduro has refused all aid. He has even deemed all aid from the United States illegal.  However, although help cannot be imported, there are still aids inside the country. Susana Raffalli, an advisor in nutrition and a Venezuelan native, started a project and weighed some of the children in the population.  Her results showed that 11.4% of the children were experiencing acute malnutrition.

For the past year, she has partnered with Caritas, a catholic charity, and they have helped 1575 children return to a stable weight.

Ecclesiastes 5:8 says, “If you see the extortion of the poor, or the perversion of justice and fairness in the government, do not be astonished by the matter. For the high official is watched by a higher official, and there are higher ones over them!” This is a hopeful verse for Venezuela and the people there should remember that even though they have a corrupt government and there is an economic crisis, there is a higher power they can rely on. They may be going through many tribulations, but they should keep their faith and trust in God.

About the only thing Venezuela has in abundance is chaos. “Venezuela: How a rich country collapsed.” CNNMoney, Cable News Network, money.cnn.com/2017/07/26/news/economy/venezuela-economic-crisis/index.html. Accessed 24 Aug. 2017.